The Vietnam War began on November 1, 1955.  Great moments are not always synonymous with good moments.  The Vietnam War was a tragic event that separated families all across America often through death and the terrible consequences of war that we still see today.   The war took place in Vietnam, Laos and Cambodia from 1955 until 1975.  African American soldiers participated in high numbers in what became the longest war at that time.  Youth from rural America and the inner cities  were drafted while many volunteered for a war unlike any other America had participated in since it’s inception.  There were 7,243 African American Deaths out of a total of 58,220. 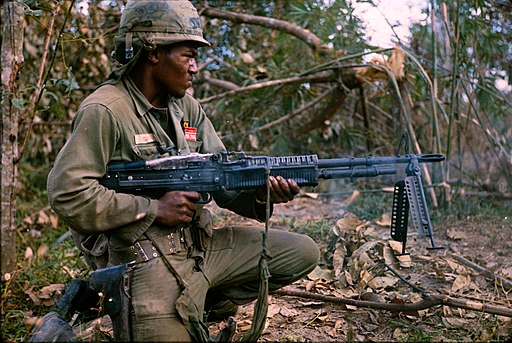 On 8 January 1967, PFC Milton L. Cook (Baltimore, MD) fires his M60 machine gun spraying a tree line. The platoon received sporadic sniper fire from the tree line earlier. PFC Cook was one of many Soldiers from Company C, 1st Battalion, 5th Mechanized Infantry, 25th Infantry Division on a search and destroy mission. The mission was a part of Operation Cedar Falls conducted in and around the Filhol Plantation near Cu Chi, Republic of Vietnam.

In the decades since the end of the Vietnam War, African Americans have continued their upward ranks in the armed forces.  One of these leaders is Brig. Gen. Linda L. Singh, Assistant Adjutant General – Army, (shown in the video above) she is the first female and the first African-American commander of the Maryland Army National Guard.