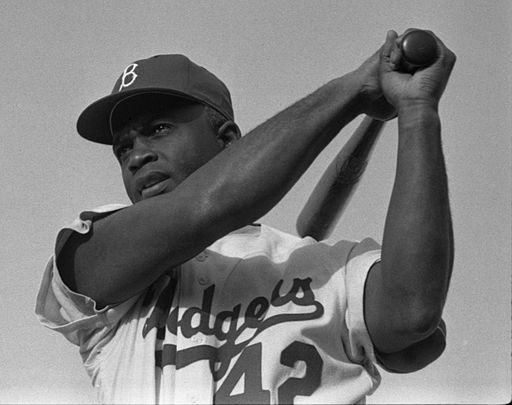 Baseball great Jackie Robinson was inducted into the Baseball Hall of Fame on July 23, 1962.  He became the first African American to play Major League Baseball in the twentieth century on April 10, 1947. Robinson who signed with the Brooklyn Dodgers played his first game on April 15, 1947 at Ebbets Field in Brooklyn against the Boston Braves.  He attended Pasadena Junior College where he excelled in all four major sports, baseball, football, basketball and track and field. After Pasadena Junior College he went on to UCLA where he was the first athlete in the history of the university to letter in four sports ( baseball, football, basketball and track and field). Robinson entered military service during World War II and served as a second lieutenant from 1942-1944 in the army. He began his professional baseball career after leaving the military.  The rest is baseball and integration history. Robinson endured racial slurs, threats of violence and blatant discrimination as he began play as the only African American in the league.  He maintained personal and disciplined restraint against the racial harassment and quieted his opposition through his amazing talent on the field.  Jack Roosevelt Robinson was born on January 31, 1919 in Cairo, Georgia and died on October 24, 1972 in North Stamford, Stamford, Connecticut at age 53.