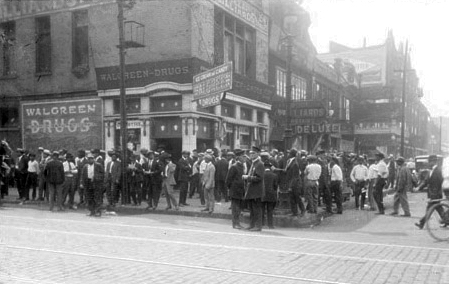 A crowd of en:African American men standing on the sidewalks in front of a Walgreen Drugs at the corner of 35th and South State Street in the Douglas community area of Chicago , during a race riot. Police officers are standing at the forefront of the crowd.

On July 27, 1919,  Eugene Williams, a young African American man was hit by a rock while floating into the area of a segregated beach in Chicago by a white man in the beach area.  Williams fell off his raft and drowned.  When the police arrived, they arrested an African American man for a minor complaint and refused to arrest the white man who threw the rocks resulting in the death of Williams.  This caused a major racial conflict that concluded on August 3, 1919 with 38 people killed and over 500 injured. 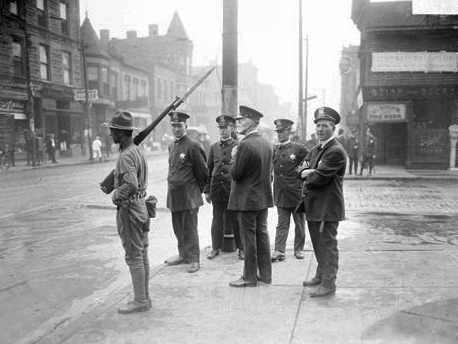 Five policemen and one soldier with a rifle standing on a street corner during a race riot in the Douglas community area of Chicago, Illinois.