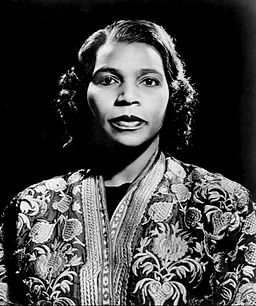 Marian Anderson gave her date of birth throughout her life as February 17, 1902. Following her death it was reported that her actual birth may have been February 27, 1897. Although there may be some confusion on her actual date of birth, her status as one of the most gifted and talented contralto’s of our times is without debate. Her beautiful and appealing voice commanded the attention of audiences in concert halls around the world for decades.

Marian Anderson greeting members of the audience at the ceremony held in the auditorium of the U.S. Department of the Interior at the dedication of a mural painting commemorating a free public concert given by her on the steps of the Lincoln Memorial on Easter Sunday, 1939

On April 9, 1939 Marian Anderson opened the doors for many African American artists against racial discrimination by singing at the Lincoln Memorial when she was prevented from singing to an integrated audience at Constitution Hall. First Lady Eleanor Roosevelt and President Franklin D. Roosevelt helped with Anderson being able to sing instead at the Lincoln Memorial in front of over 75,000 people and with millions more listening on the radio.  Anderson died on April 8, 1993 in Portland, Oregon.