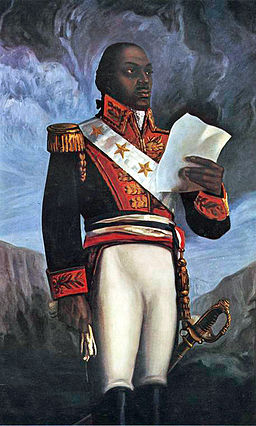 The world’s most successful revolution involving slaves originating from Africa began on August 22, 1791 in the French colony of Saint -Dominque, now Haiti.  Francois-Dominique Toussaint L’Ouverture is credited with leading the successful slave revolt that resulted in the creation of the country of Haiti.  L’Ouverture was nicknamed “Napleon Noir” or the (Black Napoleon) because of his dynamic leadership skills and military ingenuity. He dropped his initial alliance with the Spainards from Santo Domingo for the French when France abolished slavery. While governing Saint -Dominque,  L’Ouverture established a state with a disciplined military and employment pay structures where before there had been slave labor.   He also created trades with the United States and Britain.

Napoleon Bonaparte sent troops to place the French back in control of the nation in 1802. Because of the magnitude of the invasion of over 20,000 troops led by Napoleon’s brother and law, General Charles Leclerc, L’Ouverture agreed to stop fighting and retire if the French would not renew slavery.   A while later,  L’Ouverture had agreed to meet with French General Jean-Baptiste Brune’s for talks at his home and was assured of his safety.  The meeting was a successful  trick to capture L’Ouverture.   He was taken to a mountain prison in France where he died after continued interrogation and mistreatment in 1803. Meanwhile back in Saint -Dominque, a lieutenant of  L’Ouverture, Jean-Jacques Dessalines continued the revolution and acquired freedom for his country from the French and declared independence in 1804.
Skip to content