On March 27, 1944 the first African American to serve as United States Secretary of Veterans Affairs, Jesse Brown was born in Detroit,  Michigan. 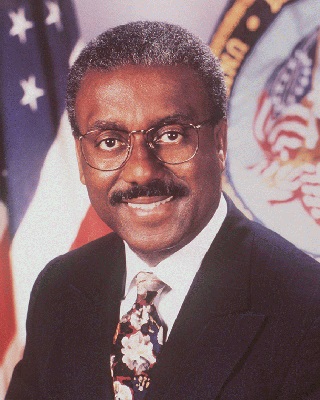 After being appointed by President Bill Clinton, Brown served as Secretary of Veterans Affairs from January 22, 1993 until July 3, 1997.  Brown could empathize with those he served as Secretary of Veterans Affairs. While serving in the marines his right arm become partially paralyzed from a gunshot wound during the Vietnam War. Ironically, the veteran who would be treated at a VA Hospital after returning to the states, would one day be in charge of all veterans affairs.  When Brown returned to Chicago, Illinois after his service in Vietnam, he became involved with the Disabled American Veterans (DAV) and would eventually move to Washington, DC to work in the national office where he would become the Executive Director. Brown would go on from the DAV to his appointment by President Clinton as Secretary of Veterans Affairs. He graduated from City Colleges of Chicago and was married to Sylvia Scott Brown.  Brown died on August 15, 2002 in Warrenton, Virginia at age 58.