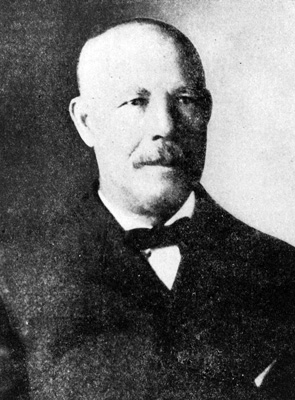 The only African American in congress in 1883, James E. O’Hara  was born a free man on February 26, 1857 in New York City to an Irish American father and West Indian mother. As a young man he traveled to North Carolina with missionaries and settled in the state.   He taught school to African American children in New Bern and Goldsboro, North Carolina. O’Hara studied law at Howard University in Washington, DC and was later admitted to the North Carolina bar as an attorney. He became active in politics in the Halifax County, North Carolina area and in 1874 and 1876 unsuccessfully ran for Congress in North Carolina’s Second District which was often referred to as the “Black Second” because of the heavy concentration of African American voters.  He was finally successful in 1878 when he was elected in the Second District after defeating a white Democrat,  W.H. “Buck” Kitchin and James H. Harris, an African American Independent Republican.  Controversy led to many of the votes being invalidated by the Democratic registrars.  The election was given to Kitchin.  Four years later in 1882, O’Hara ran for congress again and defeated Congressman Orlando Hubbs.    He was seated in March of 1883 as the only African American in congress during the 48th Congress.  O’Hara served two terms in congress before losing re-election in 1886.  He died on September 15, 1905 in New Bern, North Carolina at age 61.