Hiram Rhodes Revels representing Mississippi became the first African American to be sworn into United States Senate on February 25, 1870. Revels served as a Republican representing the state of Mississippi from February 25, 1870 until March 3, 1871. He was born on September 27, 1827 in Fayetteville, North Carolina to free African Americans. Revels worked as an ordained Methodist minister and served as a high school principal in Baltimore, Maryland. 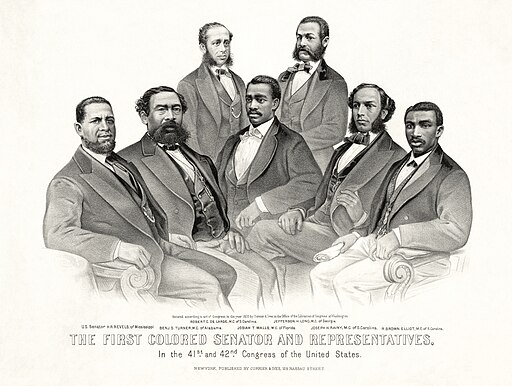 Revels began his political career after moving to Mississippi after the end of the civil war.  It was there that he was elected to the state senate. While serving in the state legislature in Mississippi, he was elected by his peers to feel a vacant United States Senate seat.  Upon arriving in Washington, DC, there was much debate among U.S. Senators about Revels serving as a senator, he was seated on February 25, 1870 by a sweeping vote of 48 to 8.  Upon leaving the senate after a little over a year, Revels returned to Mississippi where he would become president of Alcorn College.  He died on January 16, 1901 in Aberdeen, Mississippi at age 73.