America’s largest and oldest civil rights organiztion, the National Association for the Advancement of Colored People (NAACP)  was founded on February 12, 1909 in response to a race riot in Springfield, Illinois. 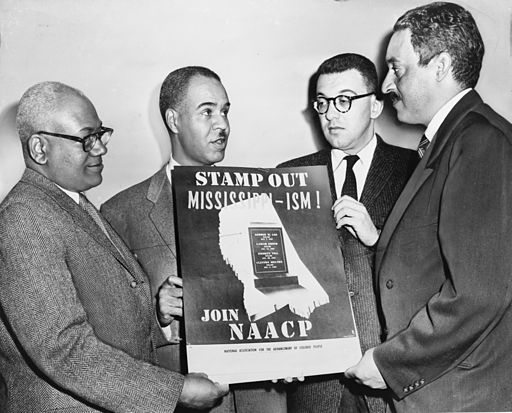 Holding a poster against racial bias in Mississippi in 1956, are four of the most active leaders in the NAACP movement, from left: Henry L. Moon, director of public relations; Roy Wilkins, executive secretary; Herbert Hill, labor secretary and Thurgood Marshall, special counsel.

Because of the horrific acts that were being done against African Americans, a little over 50 white liberals and 7 African Americans met to discuss the racial crisis. Out of this meeting came the existence of the NAACP.  Some of the African Americans in attendance were W. E. B. Du Bois, Ida B. Wells-Barnett and Mary Church Terrell.  Among the white liberals at the meeting were Mary White Ovington and Oswald Garrison Villard, The organization continued the focus of the Niagara Movement which was the precursor to  (NAACP).  The Niagara Movement was organized by W.E.B. Du Bois and William Monroe Trotter 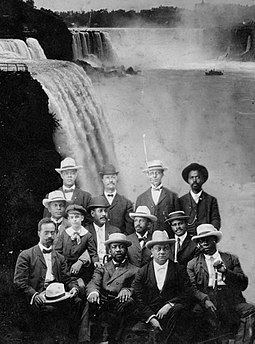 The Niagara Movement was founded on July 11, 1905 at Niagara Falls near Fort Erie, Ontario.

The meeting which was organized by W.E.B. Du Bois and William Monroe Trotter brought together a group of civil rights activists often referred to as anti-Bookerites because of their opposition to some of the more perceived passive approaches to dealing with discrimination advocated by Booker T. Washiington.

The men who met at this meeting  were supportive of a more aggressive  method of ending discrimination in America.  They demanded among many things the equitable treatment of all American citizens and all of the rights guaranteed in the 13th, 14th, and 15th Amendments to the United States Constitution.