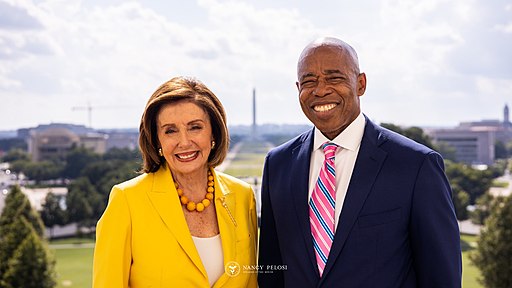 Nancy Pelosi and Eric Adams at the Speaker’s Balcony

Adams life demonstrates how success can be achieved regardless of the conditions of one’s early environment. He was born one of six children in poverty on September 1, 1960 in Brooklyn, New York City. Through employment as a maid, his single mother was able to move the family from Brownsville to South Jamaica, NYC.

Ironically, it is said that a motivating factor to become a police officer came from a teenage beating from NYC Police Officers while being temporarily held in jail. Before entering politics, Adams held the ranks as a Police Officer with the NYPD of Sergeant, Lieutenant and Captain over 22 years. His political career spans four terms as a New York State Senator prior to serving seven years as the first African-American Borough President of Brooklyn before being elected Mayor of New York City.

The Words of Eric Adams

“This Is Our Challenge New York

I believe that Change Is Coming, and this is our moment to step onto this stage and be fully prepared for the journey ahead. I ask you to fight with me, for your future and your children’s future. I stand with you, I stand for you, and together we’ll fulfill the promise of New York City. I Am YOU!!”