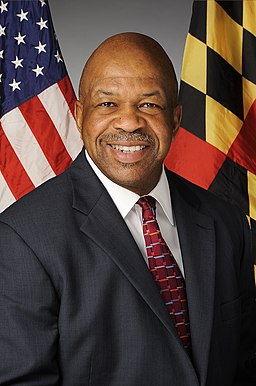 Congressman Elijah Cummings, Chairman of the U.S. House Committee on Oversight and Reform died on October 17, 2019 at age 68.  Congressman Cummings was born on January 18, 1951 to Robert and Ruth Cummings in Baltimore, Maryland where he lived until his death.  He was married to Dr. Maya Rockeymoore Cummings and was the father of three children.

He received his undergraduate Political Science degree from Howard University in Washington, DC where he served as Student Government President and graduated Phi Beta Kappa.  Cummings would go on to receive his law degree from the University of Maryland School of Law,  He started his political career as a representative in the Maryland House of Delegates where he served for fourteen years and was named the first African American Speaker Pro Tempore.  In 1996 he was elected as a Representative from Maryland’s 7th Congressional District. He served in this position until his death.

Congressman Cummings will be remembered as a  a giant of a man whose statue became even larger with greater impact during the most recent days of congressional hearings and governmental investigations.  His voice echoed with emotion as he stood strong in his fight for truth.