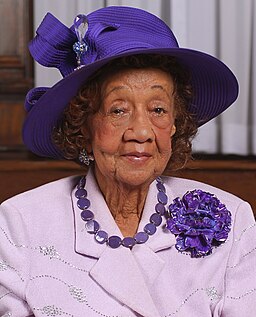 Height spent a lifetime working to improve the conditions of women.  She served for 40 years as the president of the National Council of Negro Women. Height worked from 1944 to 1977 on the national staff of the Young Women’s Christian Association (YWCA).  She also served from 1946 to 1957 as the president of Delta Sigma Theta Sorority.

Height was the first African American to own property on Pennsylvania Avenue in Washington, DC.  She received her undergraduate degree in 1932 and masters a year later from New York University.  She received the Presidential Medal of Freedom in 1994.  Height’s life was as her service to America, long and inspiring.  She died on April 20, 2010 in Washington, DC at age 98.

Dr. Dorothy I. Height is honored during Emancipation Day in Washington, DC.