Perhaps the greatest track and field star of all time, James Cleveland “Jesse Owens” died on March 31, 1980 in Tucson, Arizona at age 66. Owens became famous at the 1936 Summer Olympics in Berlin, Germany much to the dismay of Adolph Hitler after winning four gold medals.

Photo of US Olympic team sprinters (from left) Jesse Owens, Ralph Metcalfe and Frank Wykoff on the deck of the S.S. Manhattan before they sailed for Germany to compete in the 1936 Olympics. They’re shown doing a light warm-up on the deck.

Owens was born September 12, 1913 in Oakville, Alabama to Henry Cleveland Owens and Mary Emma Fitzgerald. There was little doubt left about Owens great running ability while still a teenager at East Technical High School in Cleveland, Ohio, he tied the world record of 9.4 seconds in the 100 yard dash and long jumped 24 feet 9 1/2 inches during the 1933 High School Championship in Chicago, Illinois. 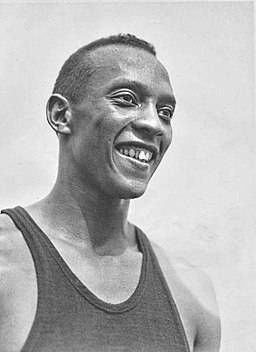 He would later receive national fame as member of the Ohio State University track and field team.  While a student there and still enduring the rigors of segregation and discrimination (having to live off campus with other African American Athletes, not being able to eat with the white athletes in restaurants while they traveled or stay in the same hotels with them) he still broke existing NCAA records  by winning eight individual NCAA  championships.
It was the 1936 Summer Olympics that engraved Owens name in the history books forever when he represented the United States in front of a country whose leader thought African Americans were inferior, he dominated in his competition by winning four gold medals in front of the Fuhrer of Germany and the world. Hitler’s goal of proving that the white Aryan race was superior to other races through their dominance in the 1936 Summer Olympics was defeated by the performance of Owens, the other African American athletes, and Black Olympians from other countries.